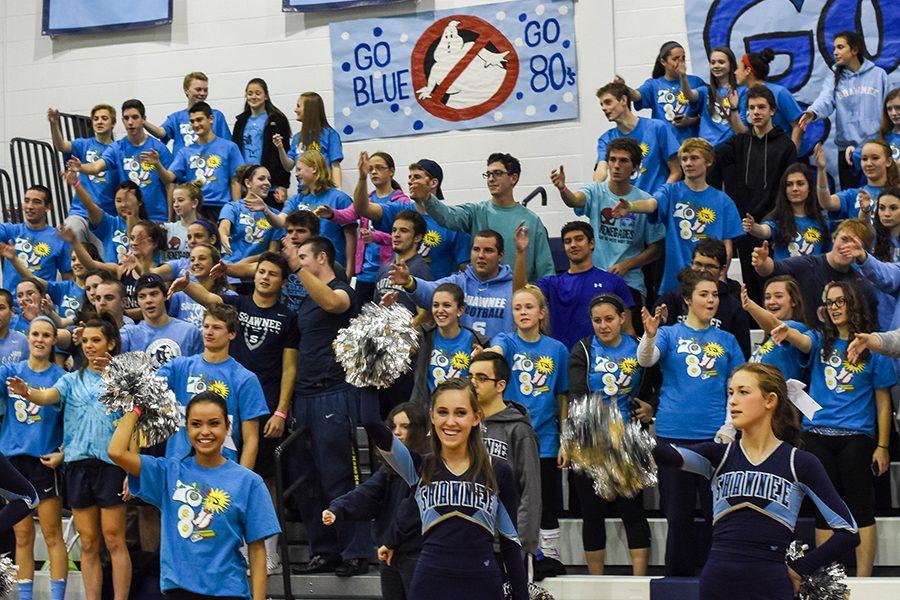 I wrote a more in-depth article regarding this that you can view in the Student Life section of the Renegade Report, but I wanted to talk about a different issue here.

Is Shawnee School Spirit declining among students? I ask this because, in my research for the cancellations of both events, I learned that student enthusiasm for and participation in school-hosted events has been steadily declining over the past few years.

I attended Blue and White Night both my freshman and sophomore years, and both years I noticed a lack of enthusiasm from students. In the weeks leading up to the event, I heard relatively few people saying they planned to attend. Even in my own group of close friends, only two other people besides myself went freshman year, and only one other person joined my sophomore year.

In addition, I heard few people talking about wanting to participate in the activities. Most telling of all, I noticed a sharp drop in student attendance between my freshman and sophomore years.

This came as a shock to me as I have two older siblings, both of whom graduated from Shawnee and one of whom, my older sister, always attended Blue and White Night and similar events every year of her high school experience.

My sister would always tell me how it was one of the best things about Shawnee. The activities were fun, the competition exhilarating, and the feeling of winning that year’s competition very exciting. According to her, the attendance her senior year was so great that some students had to sit on the floor because the bleachers were full. She made it sound so amazing that I figured that every student would be looking forward to participation every year.

Seeing the lackluster turnout my first year at Shawnee was then an unexpected surprise to me. My second year here, I was even more surprised to see an empty gymnasium on what was supposedly one of the most fun nights of the year.

Mr. Looney revealed to me that this trend has been happening over the past few years. He said that student attendance and participation in the event has noticeably been declining in recent years, which is what led to this year’s cancellation.

I noticed something similar when I attended Cotillion last year. In the halls during the weeks leading up to the dance, I heard plenty of students saying how they weren’t going to attend the event because they thought it would be “lame.”

Cotillion certainly isn’t up there with JDD or Senior Prom in terms of fun, but I personally really enjoyed the dance when I attended last year. Unfortunately, despite this year’s new theme of 80’s glow, a theme chosen to excite more student interest (I thought it sounded fun), students still felt a lack of enthusiasm for the event, ultimately leading to its cancellation.

This declining school spirit deeply concerns me. Shawnee has plenty of fun extra-curricular school events for students, but, as Mr. Looney informed me, they all depend on student enthusiasm and participation. If this trend continues and fewer and fewer students attend events in the future, what will be the next event that gets canceled?

I’ve noticed a lack of enthusiasm at the annual football Spirit Rally, which my sister had told me was fun when people participated. In the spring, Shawnee hosts class trip events. They are significantly smaller than the senior Disney World trip; simple “one-night only” events, like a Phillies game. The turnout to that my freshman year was not very large for a class of over a hundred students. Could that be the next thing to go?

I don’t mean to say that there is no school spirit — the student section of the Renegades football home games is usually full of students cheering on our team. Students still wear Shawnee-branded clothing in the halls every day.

But the declining attendance at events where school spirit should be at its highest has me concerned, especially for the younger generations of Shawnee students. If a freshman class sees that a senior class has zero enthusiasm for school events, they’ll get the idea that school events are lame and that hating them is “cool.” That’s not the right kind of message to send to the freshman who have so many potential memories to be made over their next four years at Shawnee.

I want to leave you with this: if we want our memories of Shawnee to be full of fun, memorable moments, then we need to lighten up and enjoy ourselves. If a school-hosted event is coming up, think about how fun it is going to be instead of how lame it might be. Because if we don’t start showing some school spirit, then in the future all the memories that we have will be of homework and tests.