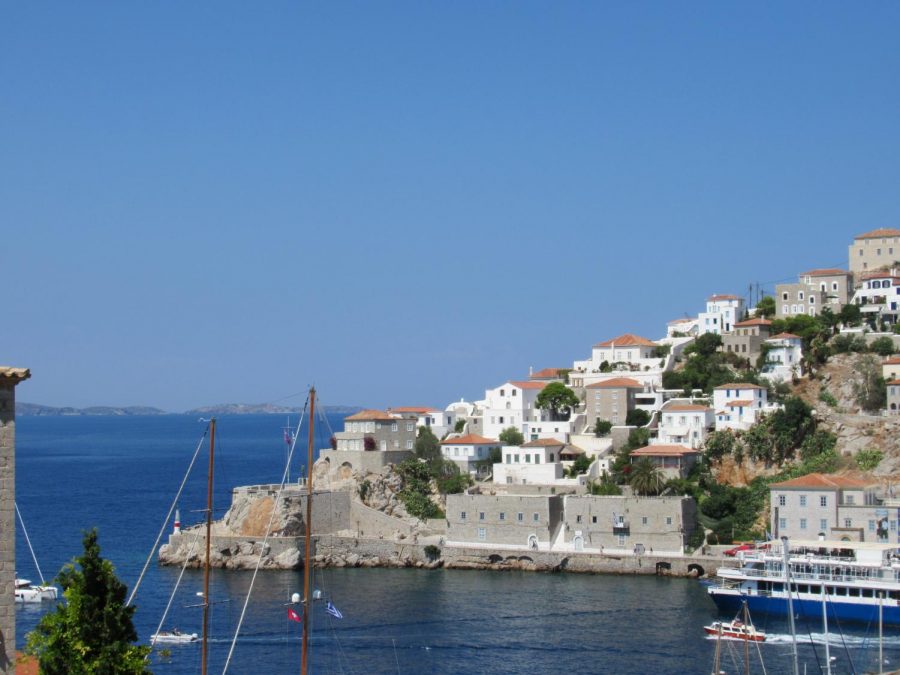 (The Island of Hydra, where donkeys and horses do the work of cars.)

With the bitter cold (we can only presume) approaching, summer adventures seem like centuries ago, and the summer of ‘19 a long dream away. Still, being kept indoors is as good a time as any to reflect on the warmer months. I’ve been privileged to see a fair amount of the world so far, but the experience of going abroad with my peers and teachers was something I don’t think I’ll quite ever be able to replicate.

Remote from our families on a continental scale, we meet in late June at the Philadelphia International Airport. After slogging our way through lines and overwaxed floors, and a long plane ride, the mountains and the dry Mediterranean sunlight of Athens are a welcome sight.

We explore the ruins of the Acropolis, look out at a forest of white walls and satellite dishes from our hotel’s roof terrace, wander the tourist-driven hub of the market, and are in general introduced to Greek culture by our guide, Marius. By bus, on foot—nothing can quite capture the breathless unreality of being set loose in a foreign country.

The history nerds among us are delighted by the museums, the least self-conscious among us by the dancing and plate-smashing, the foodies by the baklavas (pastries) and moussakas, and all but the most seasick by the cruise to the islands around Athens. It’s all clear water and sand, and the narrow cobblestone streets of Hydra.

After that, it’s off to Delphi: the important ancient access point to the gods. There, the god Apollo’s oracle would provide insight into decisions on anything from marriage to war, and people from around Greece and the known world brought artifacts which we are now able to walk among—bronze bulls, massive columns, the treasuries of the great city-states, and the amphitheater.

Then, it is a drive along the coast and a ferry ride across to Italy, passing by the silent shapes of islands that Odysseus and other Greek heroes journeyed among, buffeted by the whims of the gods.

Italy is at first a land of rolling green hills and farm-houses, but a ride west makes the coastal city of Sorrento appear out of the cliffs and the famous Mount Vesuvius among the clouds.We are treated to a tour of an old-fashioned Sorrento farm, where the ‘best lemons in the world’ are grown with the right combination of salt, sand, and sun.

Then, Pompeii proves itself to be much more like a city frozen in time than something stuck in a history book. No picture or Latin translation can prepare us for the sweaty reality of slipping on ancient cobblestones and marveling at the frescoes or the bawdy Roman graffiti.

After Pompeii, it’s Rome—the subject of our years of study. There’s something in it which reminds me of Washington D.C., a monumental city of marble and green lawns. We wander the Colosseum, the Agora (where flowers are still placed in memory of Julius Caesar), and the Vatican museums, craning our necks to take in Michelangelo’s artistry in the Sistine Chapel.

Florence next, where the highlights are the David and the Duomo, and where I may or may not barter my way to a pair of boots. The cathedrals and the great works of the Renaissance soar above us.

Of course, all of these ancient sites and the heaps of food and gelatos along the way (too many to name) are wonderful and drive the excitement of the trip, but it is the moments in between which I remember the most and will remember the longest.

We are sleep-deprived and very silly for most of it. We marvel at the utter void of darkness outside of the ferry, where the uninhabited islands have not a single light. We run up the Spanish steps and argue with other glib tourists at the top as to how many steps there are. We try (and, between you and me, fail) to translate Latin on the monuments. We visit a Sorrentan discoteca.

I’ve also become convinced that a great many of us can’t access our best qualities unless we are dropped somewhere very far and very different from home. Don’t know what that food is? Great, better eat the entire platter of it and wonder after because it tastes brilliant. Have absolutely no idea how to dance to traditional Greek music? Wonderful, this lady over here’s going to teach us. Don’t know what Marius is saying because he’s saying it in Italian just to tease us? Fantastic, let’s have the entire table of people randomly make him a bouquet of empty water bottles.

Thoughts, in retrospect, from my fellow travelers:

Anneliese Balman, junior, says it is something that she will always remember. “I thought it was a really eye-opening experience to go to such different countries from the U.S. and enjoy their cultures.”

“Traveling takes you out of your comfort zone and provides the opportunity to experience cultures vastly different from your own,” says Natalie Katrisiosis, senior. “It puts life in perspective, and I wouldn’t trade my time on the Latin trip for the world.”

Emphasizing the importance of leaving the American suburb bubble for something exotic and different, junior Tom Eckel says, “The trip was especially profound because we really experienced the places we visited and didn’t just do tourist attractions. I feel like tourist attractions often cater to the tourists, so they aren’t true reflections of the destination.”

“It was really fun to learn about different cultures and go sightseeing with my friends,” says Abby Lignana, junior.

“I was with a lot of kids that I didn’t know, which made the trip a whole lot better,” says Elizabeth Margeotes, a senior not from Shawnee High School. “Every new site that we explored, I learned something that a textbook couldn’t teach us, and by the end of it I was friends with everyone.”

Celia Luling, senior, says her favorite part of the trip was the Sardonic cruise in Greece, and the beautiful island of Hydra in particular. “I also enjoyed the trip to Florence and seeing all of the artwork and high fashion stores. Trips like that are once in a lifetime,” she says, “and I want to go back every day.”

Travel is expensive, addicting, and one of the most formative ways one can spend time. I think for many of us it’s a life’s dream, to travel to as many places as we can, and most of us have to go at it one bit at a time —whether you skip from luxurious hotel to luxurious hotel or slum your way through the hostels and empty beaches of world, it will almost never be what you expect. You’ll come out if it with a better understanding of at least a few more of the 7.5 billion people on this planet, including yourself.