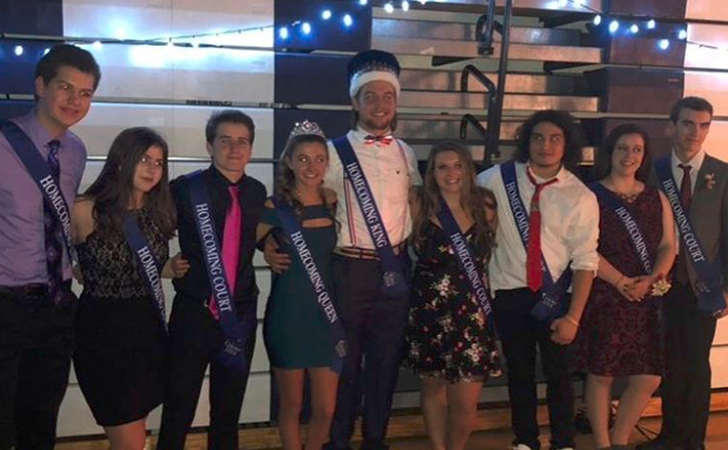 Shawnee High School’s annual homecoming dance was held on Saturday, November 17, after planning and preparation from the school’s executive council. The event lasted from 7 to 10 pm in the front gymnasium and featured music, baked goods, and plenty of dancing.

“[Executive council] takes care of things like the homecoming dance that involve the whole school,” explains Danny Krastek, an executive council member from the Class of 2022. “[Planning] took time… some of us stayed after yesterday to help decorate for this evening… We put up decorations and we all brought a baked good, like brownies and cookies and such.”

Homecoming is the first time many students experience a high school dance. Junior Emily Bosco had never been to a Shawnee dance, but she does not regret deciding to come this year.

“It was so much fun,” said Bosco. “I love to dance but I don’t often get to go out and dance with my friends, so this was an awesome experience… the whole atmosphere really pulled it all together.” Bosco, like many other students, spent nearly the entire night dancing with her friends.

It wasn’t just first-time attendees who had a good time, though. Rachel, a junior, has been to every Shawnee homecoming dance since she was a freshman, and she still considers it an enjoyable experience. In her words, “It was definitely the best of my 3 years going. The DJ wasn’t that great, but besides that it, was a pretty fun night… I also enjoyed the “Africa” by Toto remix.”

Some school events, such as Blue and White Night and the sophomore cotillion, have been cancelled in recent years because of the lack of student participation, but homecoming is one event that keeps going strong.

“[It’s successful because] it’s a dance that allows everyone from each grade to participate, compared to the other dances,” says Carter, a junior at Shawnee. “I thought homecoming was great, but I wished they improved the music. I loved the photos that were taken at the dance in the little photo shoot area.”

Similarly, Rachel said, “It’s a relatively cheap excuse to get dressed up and go have fun with your friends, and since it’s a school-wide thing, it would be pretty hard for an event like Homecoming to get cancelled.”

When asked if the school could improve anything next year, Bosco agreed with the suggestions many other students made. “Definitely the music. I mean, when they played Africa by Toto everyone was jamming, but I feel like there needed to be more early 2000s and even some classic 80s thrown in the mix.”

Ultimately, was homecoming a success this year?

“I would say probably,” Krastek reflects. “I think most people had a good time.”

“I liked being able to be myself around my friends and just dance and scream-sing without anyone judging me, because that’s what everyone [else] was doing…” Tatum Bell, a Shawnee sophomore, reflects. “That’s what I like about this kind of stuff. When high school is over and we all sort of forget, there is that one memory or one person stuck in your mind. So stuck that you think you can remember them forever. Maybe dancing with friends and feeling like you fit in for once is that memory.”

There were two major takeaways from the 2018 homecoming dance.

First of all, many Shawnee students wouldn’t turn down the opportunity to get dressed up with their friends, especially for such a low cost. That’s a major reason why homecoming is so successful.

Second, no matter who someone is or what crowd they are from, everyone likes hearing “Africa” by Toto. It’s a unifying thing.

For additional pictures from the event, please visit https://www.shawneephotoclub.com/ and @shawneehsnj on Instagram.