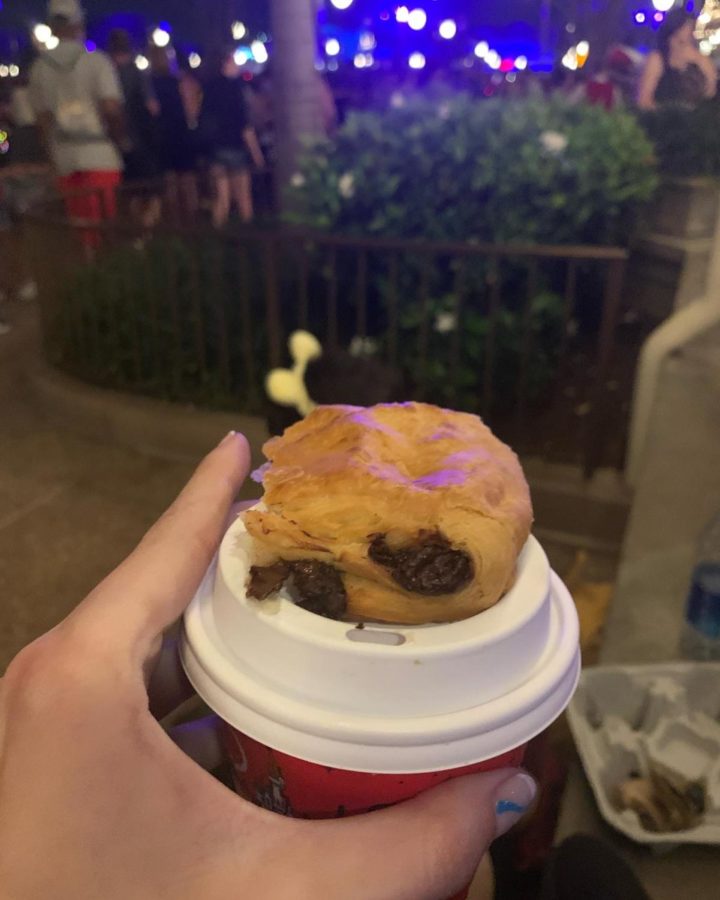 A nice recap of all my favorite restaurants from the month of March, a very good month for munching.

After seeing the school musical, which was killer, me and my team struggled to find somewhere with open kitchens after 10 p.m. With nowhere to turn, we ended up pulling into the Stokes Rd. McDonald’s, which is the McDonald’s populated by students. It’s like the bar from Cheers – everybody knows your name.

I got the standard Happy Meal, which goes for a little more than $5, and is only about 500 calories. I like getting Happy Meals here because they make me happy. They give me a little toy. Plus, if the food tastes bad that day, I didn’t spend a lot on it. I also ordered at the Kiosk, which means that I got a free chocolate chip cookie. Great experience!

I really like the variety in the menu. It offers a lot of options that are vegan, Greek, and Italian. It’s also really low cost which we absolutely love and there’s a lot of options. We wish the water cups were bigger. This would limit how often the waitress has to come to refill them. However, after this realization, we requested bigger cups and got bigger cups.

My grilled cheese was pretty good, and I appreciate the thorough grill on both sides. Annie and I agree that the fries were just okay, but Ally really liked them. Her burger was just okay. Phil’s cheesesteak was fine. The onions could’ve been better on both parts. Annie ordered a buffalo chicken wrap that was good but had big pieces of chicken that messed with the coherency.

For our dessert, we ordered the chocolate chip skillet, which is a warm chocolate chip cookie with vanilla ice cream whipped cream and chocolate syrup on top. in the words of Annie Goldberg “this is so good.“ Phil “That Was My Quote” Balint has something to say about this. “It’s pretty bangin.”

Located in the not-theme-park part of Universal Studios Orlando, Cowfish is a sushi burger bar with All-American fish, humane and unmodified meat, and locally sourced greens. The building it’s in is architecturally beautiful, and while I didn’t eat much, my meal of truffle fries with parmesan cheese sauce on top was great. I love truffle fries.

So we’re sitting there in Ally’s car on St. Patrick’s Day trying to find an Irish restaurant, only to realize that there is no restaurant with any open tables. We’re like “What is something that nobody would get on St. Patty’s?” Enter: Brother Seafood Dim Sum. Brother Seafood has given us pork, shrimp, and pig shaped dim sum!!

We sat at a very big table, which we did not like. This was a huge problem for us because we are loud people and because there were only four of us. But we pushed through! But this was very awkward. The location is also in a strip mall, and I get uncomfortable in strip malls.

Good scallion pancakes! One thing that thrilled us was the round thing that spun in the middle of the table. Ally says it’s a Lazy Susan, but it was a Chinese restaurant. The food itself is pretty standard Chinese food. We loved the shrimp dumplings so much. They were really good, and we got three helpings. The pork shumai dumplings were also really good. The big inflated pork dumplings were just okay. Weird texture.

You’re newly(ish) 18, you’re sitting on a stained couch waiting to get your first tattoo, and your friend pulls up a local pizza place on her phone, suggesting that you go there once you guys escape. And, obviously you’re feeling risky, so you decide that tonight is the night you try pizza.

Should you ever find yourself in Cape May, desperate for pizza, I cannot recommend Blue Moon enough. I got their Bianca pizza, which is a plain white pizza with ricotta cheese, and it was really good (better, perhaps, if I had been in a worse state). We also got french fries and chicken tenders, which were incredible and tasted a little above average.

I threw these potstickers up a few hours later. But they were good at the moment. But later, on the floor of the Buzz Lightyear souvenir shop, my head in my hands as employees stared down at me, hands anxious and eyes pitying, they were so bad.

I got a chocolate croissant. It was great. Made me so happy. I ate half of it while waiting for the fireworks to start and then handed it off to my friends.

The Irish food I had been craving since we couldn’t get a table on St. Patrick’s Day, Raglan Road is the best fish and chips I’ve ever had. With a vegan option to die for, various english and irish entrees, and a waitress that was incredibly nice, we loved our experience with Raglan. Our only thorn was the expense – $27 for fish and chips is a lot.

I FOUGHT FOR THIS RESTAURANT!!! We sat down and our waitress was this Australian woman with a smoker’s voice and a fleeting accent. She brought us these bread rolls that I swear to God, had something in them, because we ended up with twenty rolls. They were fluffy, they pulled apart easily, they were buttery, something was speaking to the chef. Perhaps the stars aligned.

Our non-roll food was also very good, but the rolls stole the show.

They will also, upon request, warm up their cookies.

For $42, you can take pictures with the characters and receive, literally, all the food you can eat. We ate so much food and got to meet Mickey, Minnie, Pluto, Goofy, and Donald. So incredibly worth it. Food wasn’t even that great but the sheer amount we consumed makes up for the price. Seconds on seconds.